The Health Benefits Of Kola Nut

The kola nut gained popularity when it was used in 1886 as one of the main components of the world’s most well-known soft drink, Coca-Cola. We shall cover its history below.

You may learn more about kola nuts in this article, including what they are and how you can use them as a meal or dietary supplement. Continue reading to learn how consuming kola nuts as a snack can enhance both your physical and mental well-being.

What is the Kola Nut?

The kola tree is a native of the African rainforests, and on its evergreen trees, which can reach a height of around 20 meters, you may discover its star-shaped blooms and nuts among its lustrous oval leaves. These are the nuts that this essay will discuss.

In actuality, kola nut trees come in more than 125 different species, each with a unique edible nut variety. The kola nut comes in a variety of forms, as may be seen by looking them up online or in science books.

The Garcinia kola (Bitter Cola), Cola acuminata (Crisp Cola), and monkey tail species are those whose consumption we are most interested in (cola suboppositifolia).

This dish has a long history as a nut that was popular among West African societies because it seemed to sate appetites and boost vigor. They are used in these societies’ traditional divination rituals as well as tribal spiritual traditions.

(akin to reading tea leaves). Many elderly in West Africa, especially in Nigeria, like it as a favourite snack. Additionally, Coca-Cola is the most prominent usage of kola nut extract in the food business as a natural flavoring component. However, this soda is also utilized as a caffeine source. 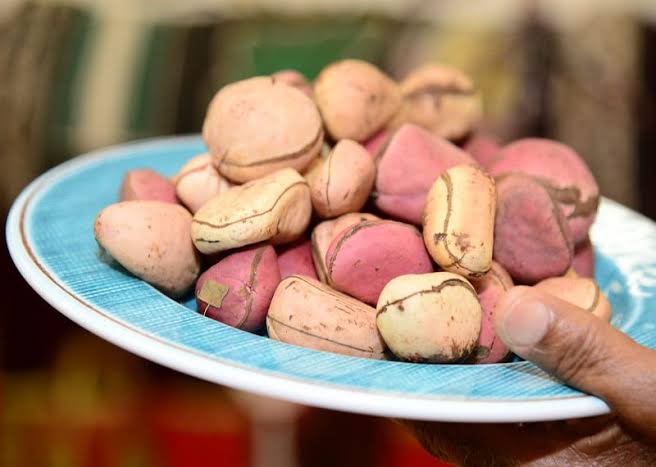 What are the benefits of Cola Nut?

The kola nut’s most well-known therapeutic or medicinal component, which will be detailed below, is its caffeine level. The kola nut does, however, also contain additional related—or perhaps not so related—compounds.

Theobromine and methylxanthine, two more organic stimulants, are also present in modest concentrations in the nut, along with other secondary metabolites, plant-based colors, and phenols that may have health advantages (such as tannins, flavonoids, and anthocyanins). It’s interesting to note that kola nuts also contain considerable amounts of important minerals, equivalent to those in another superfood, walnuts, such as potassium (3484.67 mg/kg), calcium (124.40 mg/kg), and magnesium (392.00 mg/kg).

Due to its high caffeine content, kola nuts are widely used and held in high regard as a component of nutritious diet. One nut has more caffeine than two full cups of American coffee, according to studies, which is more than enough to stimulate the central nervous system of the majority of people.

Depending on the consumed nut and how it was prepared, a nut’s caffeine content can really change.

You might eat it raw, cure it for six months, sun-dry it for forty days, or grind it and keep it for a year. This would account for the 1.5% to 3.8% range in caffeine concentration fluctuations. Because of the kola nut’s high caffeine content, its use as a physical and mental energy booster may be explained.

Similar to earlier studies on caffeine, it has been discovered that kola nut extract (in its liquid form) ingestion stimulates the central nervous system by raising heart rate and metabolic rate.

The potential to increase both body weight and fat reduction is another advantage of central nervous system activation. An extensive study carried out in 2002 investigated the effects of kola nut consumption on 167 individuals over a period of six months. It was discovered that people who consumed kola nuts and Ma Huang, which contain 90–190 mg of herbal caffeine per day, experienced larger reductions in body weight, body fat, and bad (LDL) cholesterol (compared to placebo).

Body weight and fat were reduced by 2.7% and 1.6%, respectively. This demonstrates that the kola nut’s caffeine boost not only stimulates the nervous system but can also be associated with beneficial health changes including fat and weight loss. 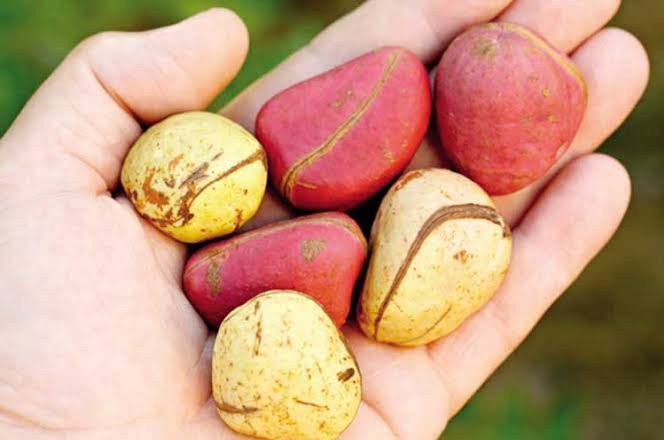 In several pharmacological fields, kola nuts have been the subject of investigations looking at their medicinal advantages. Such research has the biochemical composition of kola nuts to demonstrate that they include a variety of alkaloids, tannins, saponins, phenols and flavonoids that have shown promise in the fight against a variety of antibiotic-resistant diseases.

Kola nuts’ antibacterial properties have been further proven by a new study, which also demonstrates their inhibitory effect on the several bacterial colonies are growing (Proteus and Vulcans Anginosus Streptococcus).

Particularly these bacteria can infect different types of wounds, blood, and abscesses.

Unexpectedly, similar decreases in the growth of other mycobacteria species, which cause significant

There have been cases of TB and meningitis. This exemplifies the nuts’ potent antibacterial effect against prevalent pathogenic pathogens.

Stories about the kola nut’s numerous health advantages date back thousands of years. According to some, kola nuts cures weariness, soothe appetite, and sweeten old water. The majority of these assertions ought to be considered folklore. until otherwise shown.

Kola nuts may provide health advantages, although this has not yet been thoroughly investigated and verified. several of the The high caffeine concentration of kola nuts, which boosts energy and stifles hunger, is linked to their health advantages.

Claims have also been made that it treats:

As with other supplements, negative effects are a possibility if taken carelessly. As a result, if you often consume kola nuts, it is important to take into account any potential safety issues.

The potential detrimental impact on teeth, where the nuts may result in poor breath or discolouration, is one of the most frequently mentioned issues with ingesting kola nuts as a snack. These assertions, however, appear to be more anecdotal than demonstrably true. Overall, the toxicological characteristics of kola nuts seem to be comparable to a dose of caffeine, thus it is plausible to assume that using them as a food or supplement is risk-free and won’t have any negative effects. Naturally, due to the high caffeine content in kola nuts, it is essential to exercise caution while

a variety of medications, including benzodiazepines, propranolol, ephedrine, and quinolone antibiotics. There is some evidence that some varieties of kola nuts may irritate the digestive tract to some extent, resulting in stomach ache, and that consuming them while pregnant is not advised. This is a relevant side effect for which caution should be exercised.

It is amazing how customs and frequently consumed foods from tribal and historical diets frequently end up proving beneficial to science in contemporary studies, as is the case with kola nuts, where traditional wisdom appears to stand the test of time and benefits are seen in a number of different health areas. In this instance, the stimulating properties of kola nuts can be discussed along with the additional health advantages of their numerous components, which enhance the respiratory, immunological, and cardiovascular systems.

120+ Prayers and Declarations For The Month Of December 2022

Health Benefits of Dates To Your Body You Need To Know

Health Benefits of Honey To Your Body You Need To Know

120+ Prayers and Declarations For The Month Of December 2022

Health Benefits of Dates To Your Body You Need To Know

Health Benefits of Honey To Your Body You Need To Know