Biography Of E. A. Adeboye

Pastor Enoch Adejare Adeboye is a Nigerian Pastor and the General Overseer of The Redeemed Christian Church of God (RCCG)
Pastor Adeboye has a PhD in applied mathematics from the University of Lagos and worked as a lecturer in mathematics at the universities of Lagos and Ilorin. After joining the RCCG, he began working to translate the sermons of its then Pastor and founder, Rev. Josiah Olufemi Akindayomi, from Yoruba into English.

In 1981 Adeboye was appointed General Overseer the church, taking over from Papa Akindayomi, who had died the previous year. For three years he filled the role part-time, still lecturing at Ilorin, until giving up his university position to preach full-time.

The church, which was not well known before Adeboye took charge, now claims branches in over a hundred countries, including more than 14,000 in Nigeria. Adeboye has stated that his aim is to put a church within five minutes of every person on Earth.
In 2008, Newsweek magazine named Adeboye one of the fifty most powerful people in the world. He is married to Foluke Adeboye, also a pastor, and together they have for children, Adeolu Adeboye – Son; Leke Adeboye – Son; Dare Adeboye – Son; Bolu Adubi – Daughter.

Pastor E.A. Adeboye was born on 2nd March 1942 at Ifewara in the present day Osun State. His parents (now of blessed memory) were indigenes of the town, which is about midway between Ilesha and Ondo towns.

He had a strict Christian upbringing which was engineered by a church-going culture, which was the prevalent style of Christianity of those days. This church-going attitude gave him an appreciation of God but made no extraordinary or outstanding Christian out of him.
He underwent primary and secondary education which were almost curtailed due to the problem of funds, barefooted and in tears. He recalls “for the first seventeen years of my life, I never had to wear shoes”.

However, as God would have it, he survived against all odds to graduate from the University in 1967, at the age of 25. Between 1967 and 1975 he had added two more degrees, an M.Sc in hydrodynamics and a PhD in Applied Mathematics, and lectured at the University of Lagos and University of Ilorin. Before his lectureship at these Universities, the G.O had taught mathematics at two secondary schools viz: Okeigbo Grammar School, Okeigbo near Ondo and the Lagos Anglican Girls Grammar School, Surulere – Lagos.
It would appear that his academic and professional career and achievement greatly prepared him for the office into which God was to call him later on. 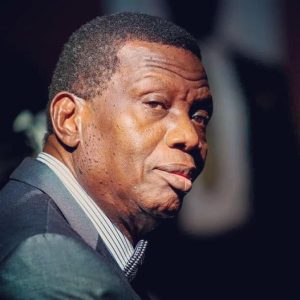 His childhood Christian background had made him appreciate God in the ordinary sense. However, it was not strict enough to preclude him from being an active young man engaging in all the perks to which a young lecturer and an educated man were “entitled”, even though he was married.

Married in 1968 to his wife, Pastor (Mrs.) Foluke Adeboye, the young couple was faced with the problem of recurrent caesarian section by which the wife had delivered their first two babies. Medical science had diagnosed that in view of the formation of pelvic bones, having babies by natural means was impossible and such advised against having further children. A solution had to be found.

How his Christian background did not preclude him from trying out other areas outside of his Christian belief where solutions might be found. In any case, his Yoruba cultural background was not averse to syncretism. “Olorun ko ko aajo” his people are wont to say, that is “God (or belief in Him) is not opposed to native remedies”. The implication of which is that if prayers are not effective, the nature medicine-man is available.
As part of the solution-seeking odyssey, the young University teacher and his wife were invited to the Redeemed Christian Church of God by his uncle, Rev. Chris Fajemirokun.

Though led by unlettered men, the visibility of the power of God was not lost on the young couple. The church was then headed by Pastor Josiah Oluwafemi Akindayomi, the General Superintendent (GS), a man who did not have any formal education and spoke no English but his native Yoruba language. However, compared to his own educated mind, this man and the other men of God in the church were infinitely superior to him in the knowledge and ways of God, and especially in their examination and exposition of the Bible.

The sermons of the GS and those of his lieutenants were quite incisive, thought-provoking and soul-stirring. Here were men who despite their educational handicap would not compromise God’s standard.
It was also here that he learnt that his way of life would lead him directly and unwaveringly in only one direction – HELLFIRE! He also learnt of the importance of looking up to Jesus as “the Author and Finisher of our faith” and the need “to cast all our cares upon Him”. 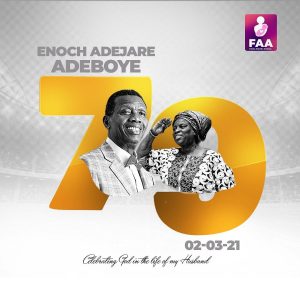 So, when on 29th of July 1973, the altar call was made in the church for those who wanted to surrender their lives to Jesus, forsake their sinful ways, and become born again, the young man, who was to become the General Overseer of the church rushed forward, and in a remorseful show of penitence, gave his life unto Jesus! Reflecting later on his conversion he said, “something overwhelmed me that mighty: that I was close to hell and I didn’t know it. I suddenly realized that it is possible to have all the PhD’s in the world and still be on the losing side. I know all the formula but I did not know the one eternal life”.

To date, all over the world, Enoch Adeboye has been conferred with several honorary degrees and national merit awards in appreciation of his contributions to humanity. In the 2009 Newsweek Elite Edition (January 5, 2009), he was listed as one of the Fifty Most Influential People In The World (No. 49 to be exact). For example, the following are noteworthy:
1999 – Received honorary citizenship and key of Cambridge, Massachusetts, USA.
2000 – Dedicated the first chapel in the Nigerian Presidential Villa, Abuja, Nigeria.
2005 – Received honorary citizenship and key of Dallas, Texas, USA.
2005 – Received honorary citizenship and key of Baltimore, Maryland, United States.
2008 – Awarded a National Honor (Order of the Federal Republic of Nigeria) by the Nigerian President
2009 – Led the Pre-Summit Prayers at the 64th General Assembly of the United Nations, Headquarters, New York.
2009 – Named one of ‘The World’s Fifty Most Powerful People’ by Newsweek Magazine (USA).

2009 – Awarded honorary doctorate degree – University of Lagos, Lagos, Nigeria
2009 – Awarded honorary doctorate degree – University of Nigeria, Nsukka
2010 – Awarded a National Sports Honor (Spiritual Pillar of Nigerian Sports)
Though the above achievements are phenomenal, Enoch Adeboye never fails to give glory to the Lord, claiming that there are greater things ahead that the Lord will yet do.

I Am A God-kind Gospel Blogger, Gospel Content Writer, Evangelist, Songwriter, Teacher and Soul-Winner. The Chief-editor of ThePreachersPortal.Org. I have worked with media houses of various religious organizations and NGOs. On This Platform, You will get access to Daily Devotionals, Live Streams, Audio Messages, Motivational Articles and Inspirational content as I share them for free. Follow me on social media to learn more about this movement.

I Am A God-kind Gospel Blogger, Gospel Content Writer, Evangelist, Songwriter, Teacher and Soul-Winner. The Chief-editor of ThePreachersPortal.Org. I have worked with media houses of various religious organizations and NGOs. On This Platform, You will get access to Daily Devotionals, Live Streams, Audio Messages, Motivational Articles and Inspirational content as I share them for free. Follow me on social media to learn more about this movement.